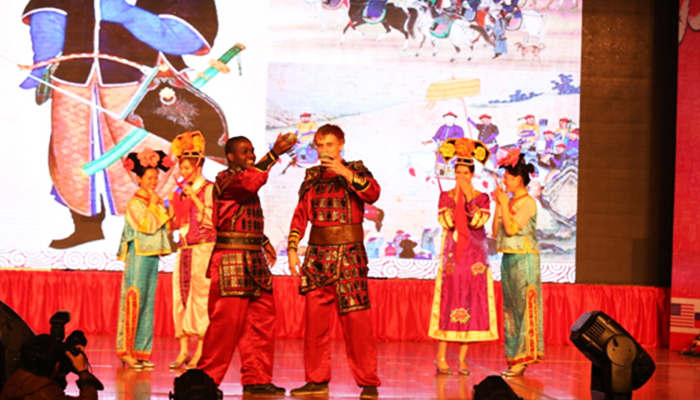 Hosted by The Education Department of Jilin Province and Jilin Provincial People’s Government Information Office and organized by Hanban of Jilin Province and Changchun University, the activity of “Chinese Bridge— Seeking Beauty in Jilin’s Culture” was held on November 7. Vice-president Feng Jiang and some leading members of the Department of International Cooperation and Exchange were invited to attend the opening ceremony. Five NENU international students cooperated with five students from Changchun Experimental School to perform jointly in splendid Baishan’s culture.

At the Opening Ceremony, students from nine institutions of higher education and nine middle schools were divided into several groups in order to give a performance. With the Qing costume show in the Manchu culture, patriotism in the Four Rounds of Linjiang Protection Campaigns and the beauty of development in modern culture and a combination of dialogues as a mainline, the activity vividly exhibited the culture of Baishan through the performance form of Manchu costume show, melodrama supporting the front battlefield of the Four Rounds of Linjiang Protection Campaigns and Baishan modern development. At last, the group represented by NENU and Changchun Experimental School won the honorary title of “The Star of Chinese Culture” and “The Little Diplomat.”

This year’s activity of “Chinese Bridge—Seeking Beauty in Jilin’s Culture” included probing into cultures of nine major regions within Jilin Province, exploring “Top 10 of Most Influential Cultures” in these regions and planning detailed culture trip line. It aimed at making students from institutions of higher education and middle schools in Jilin Province and NENU international students experience and explore beauty in Jilin’s culture through this process. In the meanwhile, it helped students find the golden key to Chinese civilization with a long history and strengthen their passions for studying Chinese and its cultures.